Ni-based superalloys are widely deployed as structural materials in extreme operating environments of high temperature (700-1000°C) oxidizing conditions. Typical applications for these include the high-pressure stages of gas-turbines in aerospace and engine exhaust systems in high performance vehicles. While superalloy development in the 20th century has raised the operational limits of these materials impressively, systematic methods for designing new alloys rather than empirical means are yet to be fully exploited. The role of the different alloying elements and their optimum levels is further complicated at interfaces where oxidation effects can dramatically alter both alloy microstructures and chemistries. APT is one of the few techniques which can explore the atomic-scale chemistry of these highly complicated alloys. 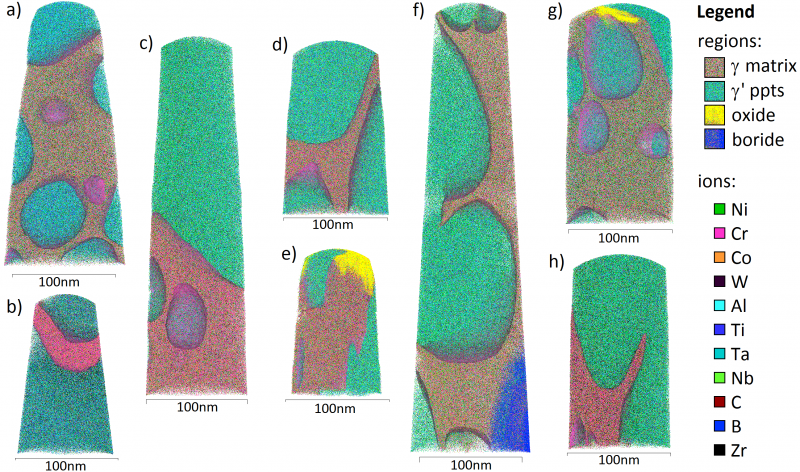 Titanium alloys are widely used in aerospace applications owing to their high strength to weight ratio. Within an aeroengine, titanium alloys are used to make fan blades and compressor discs, which are located near the front of the engine where temperatures are lower (>600oC). Oxygen and nitrogen can degrade the mechanical properties of these titanium components as a result of environmental exposure during manufacture or service. For example, oxygen encourages formation of embrittling, nanoscale α2 (Ti3Al) precipitates and, at temperatures above 480oC, a brittle, oxygen-rich surface layer is formed know as ‘alpha case’. The high chemical sensitivity and spatial resolution of atom probe tomography enables quantification and study of the location of oxygen within these microstructures. Better understanding of alpha case formation and microstructure will allow exploration of the use of titanium at higher temperatures within a jet engine, with the aim of reducing total engine weight. A fundamental understanding of the effect of oxygen and nitrogen on α2 formation can be used to inform future alloy design.